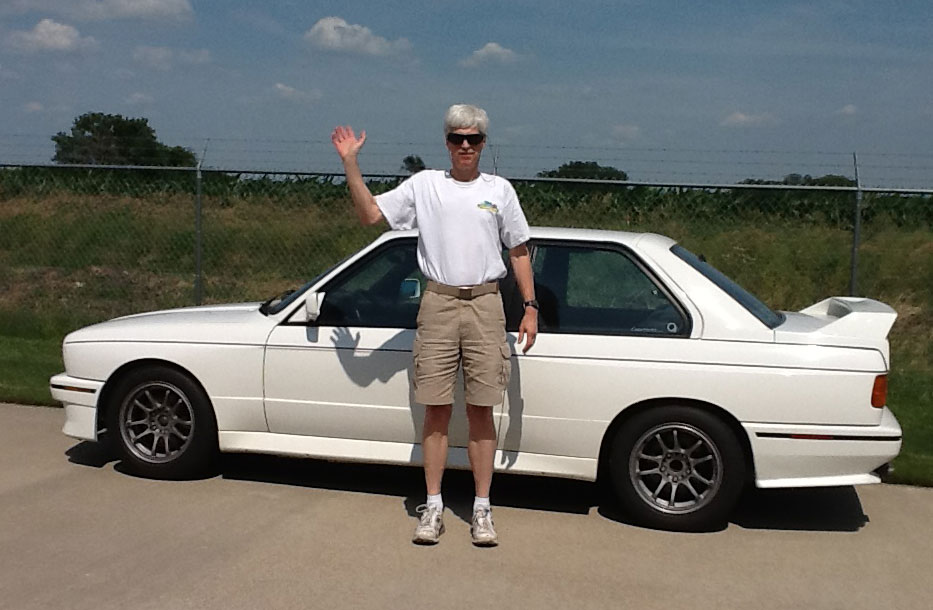 My first BMW was a 1972 Bavaria, purchased in Austin, Texas, in 1986. I had a perfectly fine and noble car (1969 Ford Country Squire “Thunderwagon”), but thought it’d be fun to have something more entertaining. I’d considered a Datsun 2000 roadster (with broken front suspension) owned by a friend of a friend in Houston. I regularly perused the want ads – 1970 Alfa GTV, anyone? An ad for a Bavaria, slightly modded (suspension stiffened, mild cam, Webers, lovely Cromodora wheels) appeared one day. I thought “too much money, too many modifications!” Then I happened to park next to it one Saturday morning in the grocery store lot. I took this as a sign. Eventually test drove the car on a highway heading east out of Austin. The speed limit dropped, so I checked the speedometer – and learned I was going 20 mph faster than I’d guessed. It felt like fine machinery – I was hooked. Mr. W was part of the family over 20 years.

With both Mr. W and Junior, any time I’m driving is fun. But to pick one: My brother was kind enough to road trip with me to Detroit to pick up Junior. The first time I sat in the driver seat and started him, I thought “it sounds like a French tractor engine!” I later learned that sound is typical of the Getrag gearbox; the engine itself sings from 5000 to 7000 rpm. Despite the attractions of the engine, I most enjoy Junior’s steering, whether on the track or at street legal speeds. It’s accurate and communicative; you’d need to wrap your hands in gauze or hit them with a local anesthetic to miss the messages from the wheel.

I love our Longest Day Driving Schools. It’s great fun to drive Junior, but also to work with students in the classroom. I can see them learning, both in class and on the track. Helping folks learn what they can do, helping them gain skills that can save them in daily driving – that’s tremendously satisfying. It’s also a great place to catch up with folks I only see at our events.
Do you have a dream car? I think the last dream car I had is one I have had since 1972 – an Austin Cooper S. I fell in love with stories of such a small car –10 feet! 1400 pounds! 1275cc! space for 4 high school boys!– doing so much. I remember Dad taking the new-to-us car through a construction zone on North Central Expressway in Dallas. The speedo cable was broken at the time; we opined that it was a little bumpy. We later calculated that 5000 rpm meant we were traversing the imperfections at 80 mph. As I noted again years later with Mr. W, a good car feels relaxed when you’re going quicker than you realize. As for a current dream car, I’m cautiously optimistic that soon someone will produce a relatively small vehicle that’s got space for 4 adults, is efficient in its use of space and natural resources, and that just feels good when you drive it.