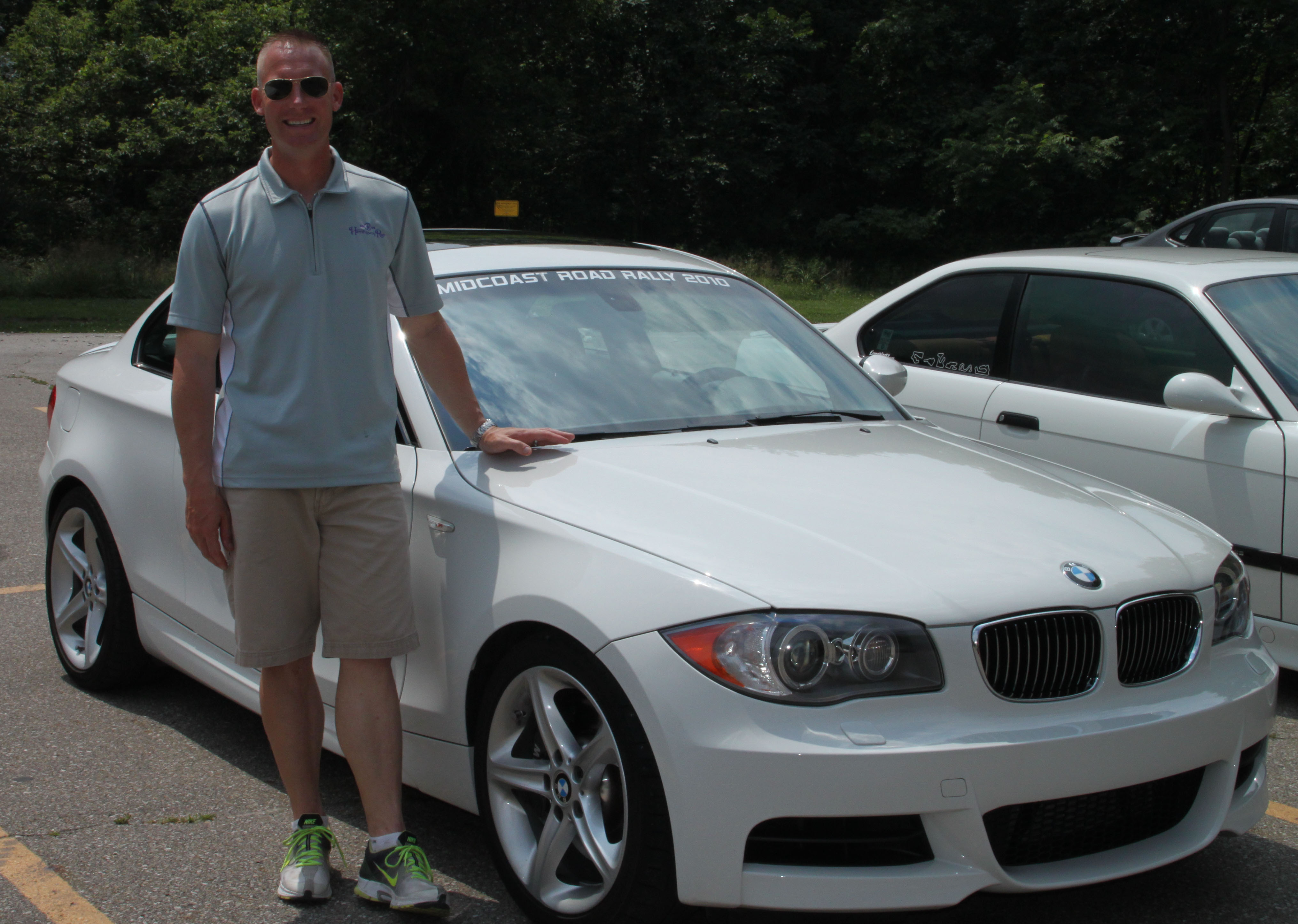 Algona, IA is my hometown and I currently live in West Des Moines.

I have wanted to purchase a BMW for many years and I finally ordered mine in 2007 through the BMW Military Sales program while I was deployed overseas. I was able to order what I wanted and saved a bunch of money. I believe it was one of the first 1 series in Iowa when it was delivered in late summer of 2008.

Do you have any BMW stories or memories?

The 2009 LDDS was the first driving school with BMWCCA and with my 135i. I ran the car completely stock down to the tires. My instructor and I were very impressed with power and braking and I have made very few modifications since then as I continue to improve my performance driving techniques.

I really enjoy BMWCCA driving schools especially at new tracks and with new chapters. I enjoy experiencing new tracks and meeting new people. There is never a shortage of great conversation about cars and performance driving.

I have always wanted an M5 for my daily driver. I would love to have something like a Radical for a track toy. I am looking for a $500 e30 to build into a race car for the 24 hour of lemons races. 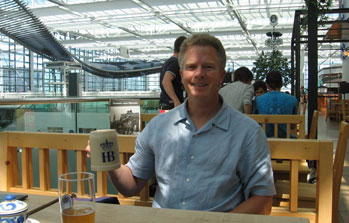 A co-worker had been buying them second hand for years. My wife (Kathy) wanted to get a Lincoln Town car and I talk her into a used 1991 BMW 525 ia and as they say “the rest is history”. She won’t drive anything else now.

Do you have any BMW stories or memories? (wrecks, flat tires, long trip to pick a car up, European delivery).

A good reason for keeping your copy Friends of BMW handy is in case you need references for service when you are out of town. Kathy and some girlfriends went on a road trip to South Dakota in the 525 and experienced some fuel pump issues. I was able to open up the friends of BMW and call someone I have never met and get referrals to some good mechanics close to the Badlands of South Dakota where she was staying. Luckily I didn’t have to use the information, but I really appreciated having someone in the area be that helpful to a stranger calling. Luckily a NAPA store worker suggested some Lucas fuel system treatment which helped clean up some bad gas and kept the fuel pump lubricated. A few months later the fuel pump finally gave up and I had to replace it.

All the rest of my stories have something to do with repairing vehicles. Like the time the wagons oil water separator clogged and forced oil up into the air filter box. Luckily it didn’t cause any engine damage. But of course it was winter, very cold and in an unheated garage. Moral of the story, when it is close to zero out and you go the car wash don’t leave the engine running to suck in all the water saturated air. Live and learn.

The LDDS driving school of course. The 2010 fall colors tour was great. Kathy and I really enjoyed northwestern Iowa and the folks who went. Beautiful scenery and great people always make for a memorable event.

I still have the 351 Cleveland four barrel engine from my 1971 Mercury Cougar on an engine stand in the garage (can you say ‘pack rat’). I want to rebuilt the engine and put it in a Factory Five Cobra Kit car. Short of that car a 69 Mach One Mustang would be nice! Too bad these are soooo expensive these days because everyone is collecting muscle cars now.

Comments Off on Chris Kjellmark of Indianola, IA 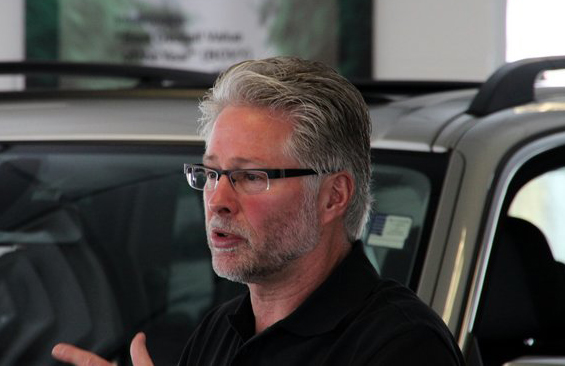 BMW cars in the Kraft family:

Many times over the years I had thought it would be fun to own a BMW, but it never amounted to more than that – a thought. Our first BMW was a red, 2004 328i that we leased new for my wife. Her son, who lives in Phoenix and owns a 5 series, was driving her somewhere one day and even as a passenger she remembered being impressed by the ride and handling. She came home and told me about it so when it was time for a new car for her, we compared the Lexus IS 250 and 350 to the BMW and felt there was no comparison. Lucky me, to this day she lets me drive her BMWs every Saturday morning fo fill the gas tank!

My favorite BMW memories are driving memories. In 2009 we drove the 335 to the Carolinas, where my parents live, for Thanksgiving. The anticipation of a longdrive on the open highway in a car with twin turbochargers was almost more than I could bear. Knowing myself like I do, I even invested in a $500 radar detector, which, by the way, got a lot of use in Kentucky and Tennessee. My other favorite memory is our roadster ride this year to Elkhart Lake, WI, for Oktoberfest. I bought the roadster – a real garage queen – in May 2008 with 15,500 miles and we’d never taken a long trip in it before. The weather was fabulous and of course once we got to Oktoberfest the friendships were even better.

So far my favorite driving event has been a BMW chapter high-performance driving event at Road America in early October. I’m really looking forward to other events though. Dream car: I’m just grateful to have wonderful cars now that I love to drive, but I dream about one day being able to afford a race-ready M3 from Fall Line Motorsports to participate in club or SCCA-sanctioned events. Not likely, I’m afraid, but that’s what dreams are for, right? 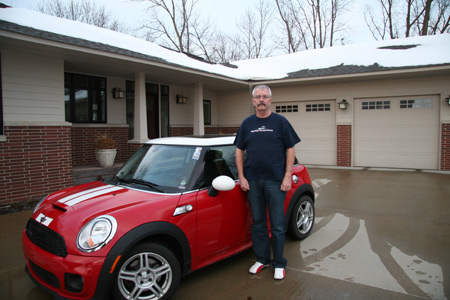 It was the combination of price, gas mileage and overall car characteristics (BMW XiT wagon). We traded a Jeep Grand Cherokee in on it and really enjoyed taking it on trips.

Do you have any BMW stories or memories?

The item that probably amazes me more than anything is how many people that deal directly with Mini Coopers gather around ours just because it has the Works carbon fiber spoiler on it. Apparently not many are delivered with one, and it always seems to draw a crowd, even with the mechanics and sales staff.

As most members know, we tend to go for the social events, but have done a few rallies.

I tend to pick a car based upon what we will be using it for (daily driver, fuel miser, SUV, etc.) and how it stacks up against the rest of the manufacturers or product offerings at the time. I am not very manufacturer loyal. The manufacturer must earn my purchase every single time I buy. However, responding directly to the question while I have never driven one or even ridden in one, I love the looks of any Aston Martin so that would probably be my dream ride.